Immerse Yourself in Sound 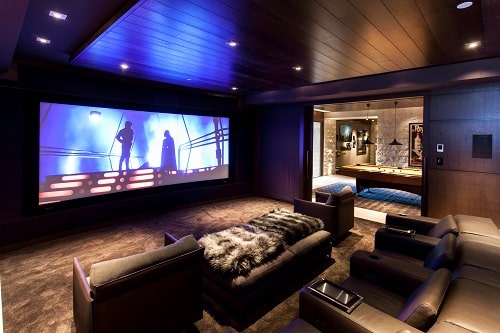 You’ve just stepped out of the movie theater having watched the summer’s blockbuster and are blown away. Your chest is pounding, your head is reeling. For the past 2+ hours you were completely immersed, enveloped in every sight and every sound of the film, all perfectly orchestrated to put you at the center of the action. So, aside from being a large-scale commercial theater and having the volume cranked up, how did they do it and, better yet, how can you replicate this immersive experience in your home theater?

While you might have been drawn into the action through its stunning image quality, seeing details previously unseen, the same holds true for the audio. Whether DTS:X technology, Auro 3D or Dolby Atmos, 3D sound systems are bringing a new dimension to movies, gaming, television and music by adding a multi-dimensional level of realism.

The evolution of immersive audio

Listen for a moment to all the sounds surrounding you: a curtain blowing in the breeze of an open window, a car whizzing by, a text alert on your phone. You can visualize the exact location of each. For a movie or game to simulate this real-life experience, it must recreate the same 3D experience.  Having made a comeback in 1976 with the introduction of Dolby Stereo, surround sound systems ushered in a new era for audio. In 1977 popularity exploded with the release of Star Wars and its engaging rear-channel effects. The early ‘90’s brought us 5.1 surround systems and who can forget closing out the millennium with the famous Matrix Lobby shootout in 5.1 HDR? 7.1 surround brought audio to the rear of the room and by 2004 technology had gained such precision that we watched in awe as the blind dancer in House of Flying Daggers meticulously replicated the strike of each surrounding drum with her scarves. And do you remember the endless anticipation of watching the Star Ship Enterprise navigate to the space dock in 2009 or being charmed as Wall-E catapulted himself through space using a fire extinguisher? Audio places a dimension to the event.

In the center of it all

There are distinct differences between DTS and Dolby Atmos technologies, but each accomplishes an immersive audio experience by routing sounds to the exact spots from which they originate.  DTS:X adds a height element to a surround sound system which improves sound accuracy. Without the need for additional speakers, and regardless of the channel assignment or speaker placement, a compatible receiver can interpret and isolate an object’s location on-the-go and direct its movement and volume.

With Dolby Atmos however, this is done using 64 speakers in a commercial movie theater! To replicate that experience in your home theater requires only 14. Essentially, Dolby Atmos avoids the constraints of sounds being routed to specific channels. Instead, they are routed to particular speakers.  Here’s how it works: Dlby Atmos Demo Sound Test.

The sensational movie “Bohemian Rhapsody” took full advantage of the Atmos technology. In addition to a stunning 4K image, the film provides a number of scenes showcasing Dolby Atmos on its UltraHD Blu-ray. The clearly defined sounds take you in and out of a recording studio and have you immersed in the 1985 Live Aid concert singing “We are the Champions.”

According to Dolby, manufacturers can embed Atmos in both hardware and software, so that your game console, laptop, soundbar and even your smartphone, can support the technology. Are you ready to make immersive audio part of your home theater? Call La Scala for a demo or in-home consultation and we’ll make your theater legendary!

Dolby Atmos Explained: What It Is, How It Works and Where to Get It

Surround Sound – The Audio Side of Home Theater

What is Dolby Atmos? All you need to know

The History of Surround Sound

Copyright © La Scala - The Art of Technology. All Rights Reserved